So the agency TMW in the Kings Road called us in for a pre-production meeting about a new project.

Great idea and a fantastic brief!

“We’d like to shoot a storm in a whisky bottle”. That’s what they said.

“No problem”. That’s what we said.

“Oooh arrr…we loves a challenge” is what we thought. 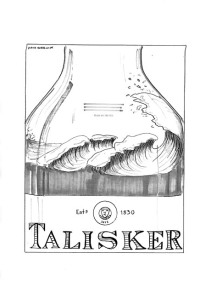 Anyways up after a very productive production meeting and our brief and courageous reply, we had to find a way to do it.

In the polished world of professional photography the idea exists that everything should be shot with a ruthless calm precision using highly engineered rigs, skilled model makers and, when push comes to shove, a little helping hand in the guise of CGI. And truth be told, it often is.

But we all figured “storm” pointed towards something more organic, more disruptive, more chaotic, and ultimately of course less CGI and more fun.

We knew that all of the elements were going to be have to be shot separately.

First off a good ‘straight’ advertising bottle shot was required, on a white background, nice highlights and straight label.

Then there was the storm.

We armed ourselves with scaffolding boards, an industrial quantity of plastic pool liner, bendy plastic, a wind machine, several buckets, watering cans, another wind machine, vast quantities of whisky tinted water and a water pump. Unfortunately we forgot the wellies.

There followed an intense sessions of splashing and making composite images on the fly.

After a serious debate as to how to model the individual waves, we regressed slowly to the equivalent of three year olds in a paddling pool. Liquid everywhere, poured, thrown, blown and pumped. We’d then put on our serious hats on again to assess the results before another session in the pond. It was, technically speaking, an iterative process. It was also, technically speaking,  a voyage of discovery in the dynamics of water. Non technically speaking, it was a riot.

We got the shots but trashed our trainers, a sacrifice well worth making.

Thanks to the sheer enthusiasm and scrupulous attention to detail of the creative team at TMW we ended up with a result that we were all pleased with, including a decision to replace the original white background  to a deep blue, which gave the image far greater punch.

This is the result. 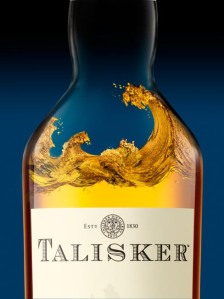 Watch the video of the Talisker retouch progression below.